Tickets are $10 for adults, $8 for students/staff/seniors, and $5 for thespians. For tickets and more information, CLICK HERE! 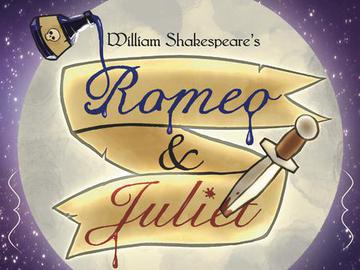 In Verona, Italy an age-old vendetta between two powerful families erupts into bloodshed. A group of masked Montagues further escalate the conflict by gatecrashing a Capulet party where Romeo Montague meets Juliet Capulet. The two fall instantly in love. But Juliet is due to marry her father’s choice, the County Paris. To prevent the marriage to the County, Romeo and Juliet ask a Friar to marry them right away. Believing the marriage might end the feud between Montagues and Capulets, the Friar agrees. With the help of Juliet’s, the couple are married in secret. Mere hours after marrying, Romeo’s attempt to halt a street fight leads to the death of Juliet’s own cousin, Tybalt, for which Romeo is banished to Mantua. The lovers are devastated. It now appears that Juliet will have to marry the County after all. She would rather die and seeks the Friar's counsel. In a desperate attempt to prevent her suicide, the Friar hatches a plot to fake her death, promising to wake her from the tomb and reunite her with Romeo. The Friar promises to send a message to notify Romeo of this plan.  The scheme falters when the letter from the Friar is delayed. Romeo, hearing of Juliet's death, is wrought with grief and vows to join his dear Juliet. He purchases a poison and rushes to Verona to lie with his love. Will the lovers be reunited before it's too late?

Content Warning: This production contains depictions of suicide, moments of violence, and references to drug use.

or
Please check your e-mail for a link to activate your account.